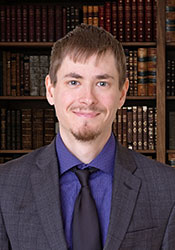 Mitchell first joined Burness Paralegal as a placement student from Fanshawe College in London, Ontario in 2014. Once his placement was concluded, Mitchell continued to split his time between his new position at Burness Paralegal and finishing his education. Quickly learning every piece of information he could about the transportation industry and the Provincial Offences Act, Mitchell became an integral part of the team.

Despite his young age, Mitchell’s experiences in court and his ability to think quickly on his feet, have given him the confidence to become one of the strongest paralegals in Southern Ontario. His competitive nature means that Mitchell will scrutinize every piece of evidence at trial as thoroughly as possible and won’t stop pushing to get you the best possible outcome. Mitchell’s drive to win yields great results for Burness’ clients.

Incredible professional legal team! No one knows more about trucking law in Ontario. We have used their services many times,…